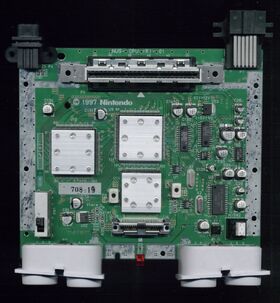 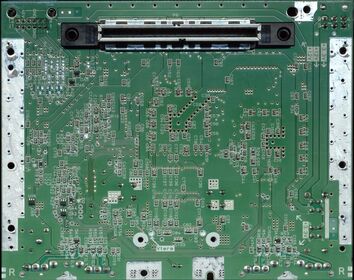 Notes:- This revision is specific to France and has the model number 'NUS-001(FRA)' on the base sticker. It is the only PAL revision to contain a 'VDC-NUS' chip necessary for the RGB mod. It also uses a totally different video encoder chip labelled 'S-RGB A' which was also used in late SNES consoles and outputs amplified RGB, unlike the 'ENC-NUS' video encoder chip used in early NTSC consoles. Like many French game consoles Nintendo had obviously planned to include RGB in this model to avoid using SECAM encoding. However they must have changed their mind at the last moment, as there are traces for RGB between the video encoder chip and the 'MULTI OUT' port but Nintendo left off the SMT components needed for it to work.

Retrieved from "https://nintendo64.fandom.com/wiki/NUS-CPU(R)-01?oldid=4297"
Community content is available under CC-BY-SA unless otherwise noted.